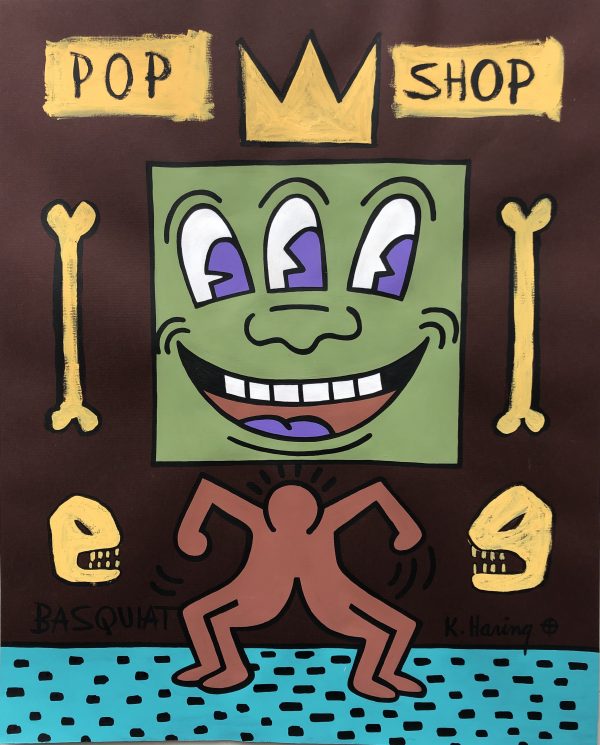 Accompanied by a Certificate of Authenticity from the Shafrazi Gallery

Call for Pricing and Viewing Arrangements

The Pop Shop opened its doors in 1986 at 292 Lafayette Street in the Soho neighborhood of Manhattan, NYC. Haring saw the Pop Shop as an extension of his work, a fun boutique where his art could be accessible to everyone. The Shop sold T-shirts and novelty items with Keith’s imagery as well as some of his contemporaries, like Kenny Scharf and Jean Michel Basquiat. Haring later opened a Pop Shop in Tokyo in 1987. Haring painted the inside walls of both shops, creating an immersive experience into his aesthetic. The Pop Shop Tokyo closed in 1988 and the NYC Pop Shop location closed in September of 2005.

This collaborative work, signed by both Jean Michel Basquiat and Keith Haring was presented to famed art dealer, Tony Sharfazi, as a thank you from Keith for his monumental support of both artist’s career.

Several iconic images are present in the work and on the certificate of authenticity issued by the Tony Shafrazi Gallery.

The Three Eyed Face: Haring initially developed the three-eyed face by accident, as he was painting a smiley face, he left too much room between the eyes, so he simply added a third one. The public began speculating and interpreting it as a spiritual reference, so Haring simply went with it.

The Dancing Figures: Lovers or players in society.

The Barking Dog: Located on the certificate of authenticity: Dogs are one of Haring’s most famous images. It first appeared in the subway drawing series between 1980 and 1985. It Started as a mythical creature it latter developed into a dog, it stands for all abuses of power, government, and oppressive regimes that demand obedience and represents authority.

The Bones and Sculls: Created by Basquiat, these images are representative of a time when the artist was hit by a car while playing in the street in Brooklyn. Called to dinner, the young Basquiat ran back into the street to retrieve a toy. Hit by a car, he was taken to hospital where his spleen was removed. During his convalescence, his mother gave the young boy a book to thumb through and learn his body parts, entitled, Grey’s Anatomy. This book enthralled the artist-in-waiting and images from the book continued to appear in his work throughout his short, explosive career.

The Three-Pointed Crown: The most recognized symbol in the artist’s oeuvre has over the last 30 years become in pop culture and underground subculture as recognizable as Warhol’s, Soup Cans, Mona Lisa’s Smile and Edvard Munch’s, Scream. Appearing in a work of art, the crown symbolized for the artist, the hero of the composition. The crown, clearly and without ambiguity, designated which character in the painting was to be king. Worn in his paintings by protagonists such as famous sports figures, jazz players and hero artists, Basquiat utilized the symbol to pay homage where he believed it befitting. Beginning in the late 70s, the crown became the symbol by which his paintings were recognized. When asked where he got his, in 1981’s now famous Artforum essay, The Radiant Child, Rene Ricard quotes Basquiat as saying that “Everyone does crowns”. Ricard goes on to say, ‘Yet the crown sits securely on the head of Jean Michel’s repertory so that it is of no importance where he bought it, stole it; it’s his. He won that crown’. Appearing today on sneakers, tee-shirts and tattoos, the crown has become the symbol of angst, rebellion, bravery and even inclusion. The symbol is raceless and knows no gender. It is as important to the youth of the 21st century as Kilroy in the 20th.

The Three-Pointed Crown clearly denotes that indeed, Basquiat was here.