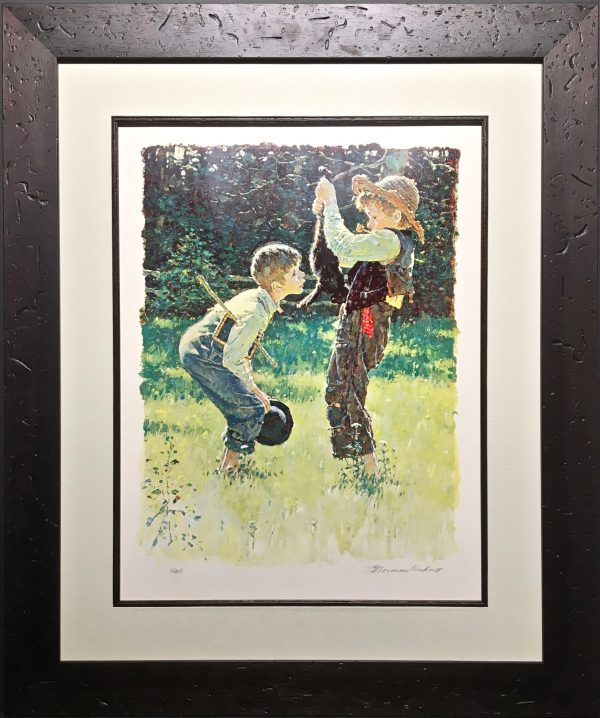 Adventures of Tom Sawyer (the dead cat) by Norman Rockwell

Originally created for Mark Twain’s 1936 edition of Tom Sawyer, Cat was hand-proofed and printed by Circle Gallery in August 1971. The collotype measures 26 by 20 inches, and the edition consists of 295 impressions. 200 were numbered and 60 artist proofs were signed in pencil by Norman Rockwell. An additional 35 prints were pencil signed and designated with roman numerals.

George Macy of the Heritage Press invited Rockwell to illustrate Mark Twain’s Tom Sawyer and Huckleberry Finn. Rockwell was passionate about this opportunity writing, “It’s fun to do a really good book, but only the best titles give me any satisfaction. Mark Twain’s Tom Sawyer and Huckleberry Finn are of the type I enjoy. These had long intrigued me, so when [I was] invited to illustrate them, I was able to throw myself into the task with real enthusiasm.”

To capture the authentic details of the story’s setting, Rockwell visited Hannibal, Missouri. At the time he was the only illustrator of the Tom Sawyer stories who went to the site. When describing the experience Rockwell claimed that “The whole town of Hannibal lives in the memories of Tom and Huck-or rather, of Mark Twain. He depicted things just as they actually were. The Tom sawyer story is truly autobiographical in the sense that even if Mark Twain didn’t personally do some of the things attributed to Tom, he understood exactly how Tom would have done them. That made my task as illustrator an exceptionally interesting one.”

This work is one of 60 Artist’s Proofs and is accompanied by a certificate of authenticity.