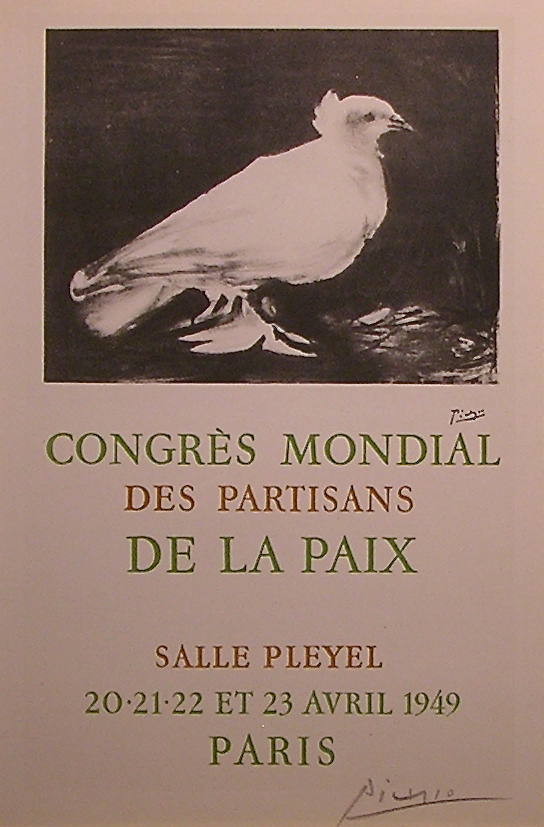 The Dove is one of the most famous themes in Picasso’s art of the 1950’s. He was asked to make an image to express the ideals and aims of the new ‘Peace Conference’ which would bring together all the European nations in the aftermath of the war – the forerunner of the United Nations. His image of the ‘Dove of Peace’ was to become one of the most famous symbols of the era. Picasso made a number of versions of the Dove composition. Picasso became a successful poster artist… with his intuition of genius and the virtuosity which accompanied his artistic production, he began to produce posters of great originality, some of them true masterpieces… Picasso’s posters were mainly aimed at exhibitions and political themes. They are characterized by the frugal colouring and the simple, schematic style of drawing. Their conception was imaginative, full of good humour, and with a personal touch that marks them as his own.

During the 1950s the renowned French printer, Fernand Mourlot, printed most of the “original” posters of the most important artists of the day. In 1959 they printed the series “Affiches Originales” for collectors. They are reduced lithographic versions of the “original” posters created by the contemporary masters, Picasso, Chagall, Braque, Matisse, Miro, Leger, and Dufy.

This very rare and desirable 1959 Mourlot poster has been signed in pencil by the artist, Pablo Picasso.