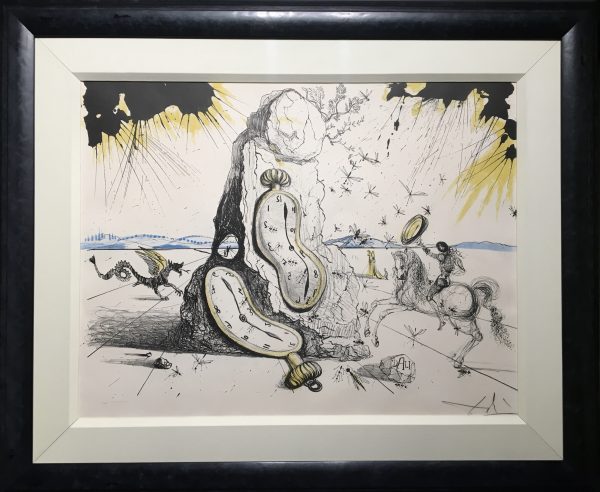 A Superb Impression with Strong Colors

This color lithograph was created by Salvador Dali in 1965, and numbered 25 from the small total edition of only 162.

Inspired by his 1931 painting entitled, Persistence of Memory, and of the fascinating revolutionary thinking introduced by Sigmund Freud and his newly developed psychoanalysis, Salvador Dali sought to tap into his dreams and subconscious mind to generate the unreal forms and figures that inhabit this unique fantasy landscape.

Recurring themes appear in this make-believe world, such as the the Ants which symbolize decay, the pre-Christian narrative of Saint George taming the Dragon, a Catholic Pope or Bishop in full regalia, whose train is carried by an Alter Boy, wasps on the attack and finally, the soft pocket watches.

As quoted by British art historian, Dawn Adès, ‘The soft watches are an unconscious symbol of the relativity of space and time, a Surrealist meditation on the collapse of our notions of a fixed cosmic order.’ This interpretation suggests that Dali was incorporating an understanding of the world introduced by Albert Einstein’s Special Theory of Relativity. That being said, it is also widely known that the original inspiration for the melting watches occurred during an al fresco dinner with Joan Miro when after the meal, prior to leaving the dinner for an appointment, the artists were served cheese and bread. Placed in the sun, the Camembert began to soften and melt, leaving the mind of Dali to associate the melting cheese and being pressed for time to make their appointment.

The work of art was published by, Sydney Lucas, New York and printed by Hollander’s Workshop, Inc, New York on Rives paper. Listed with Michler/Löpsinger 1144 & Albert Field, 65-3 and is accompanied by a certificate of authenticity.