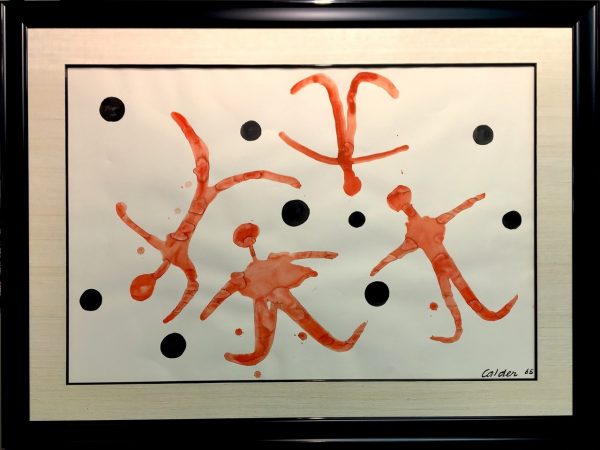 Signed by the artist

Alexander Calder (July 22, 1898 – November 11, 1976) was an American sculptor known as the originator of the mobile, a type of moving sculpture made with delicately balanced or suspended shapes that move in response to touch or air currents. Calder’s monumental stationary sculptures are called stabiles. He also produced wire figures, which are like drawings made in space, and notably a miniature circus work that was performed by the artist. ‘Sandy’ Calder was also known for his use of primary colors in his original paintings, sculptures and prints.

This original gouache on paper, entitled, Culbute (somersault) depicting circus acrobats and balls, was created in 1965 – a time when the artist was fabricating monumental works, and major retrospectives were being held both in Europe and New York. One can only imagine that these fun, heart lifting images brought the artist back to the late 1920s, an epoch in his career he had clearly not abandoned – when exploration with circus characters and the creation of found object and wire sculptures, introduced the artist to the Parisian avant-garde.

This is a rare opportunity to own a large original work of art created by one of the most important artists of the twentieth century.

This work has recently been presented to, and approved by the Calder Foundation in New York City. A certificate of authenticity, including the foundation’s assignment number, accompanies this important work of art.