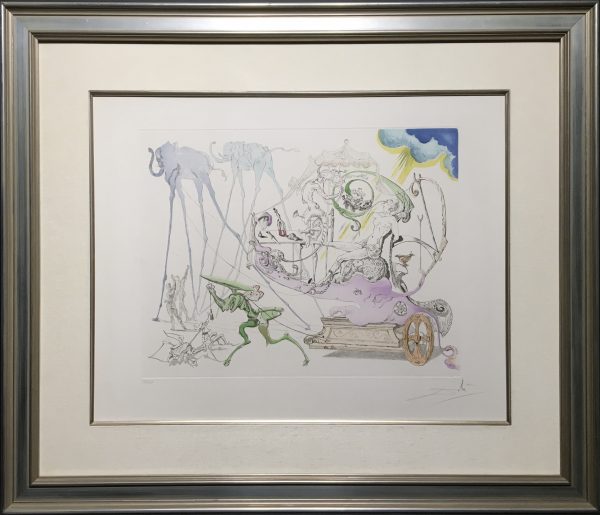 This original signed and numbered etching entitled, Dionysos was created in 1967 by Salvador Dali as a tribute to the Greek god whose Roman name was Bacchus.

Dionysos was the god of fertility and wine, later considered a patron of the arts. He created wine and spread the art of viticulture. He had a dual nature; on one hand, he brought joy and divine ecstasy; or he would bring brutal and blinding rage, thus reflecting the dual nature of wine. Dionysos and his followers could not be bound by fetters. The festival for Dionysos was held in the spring when vines would start bearing leaves. It became one of the most important events of the year and its primary focal point was the theatre. most of the great Greek plays were initially written to be performed at the feast of Dionysos. All participants, artists, writers, actors, spectators, were regarded as sacred servants of Dionysos during the festival.

This work of art is numbered 17 / 200, signed by the artist and is accompanied by a certificate of authenticity.