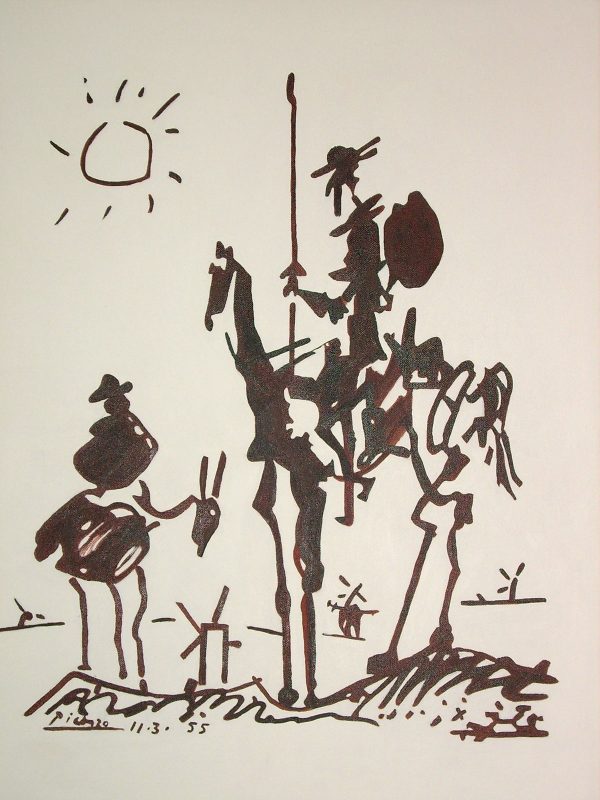 Don Quixote is from a 1955 sketch by Pablo Picasso of the Spanish literary hero and his sidekick, Sancho Panza. It was featured on the August 18-24 issue of the French weekly journal, Les Letters Francaises in celebration of the 350th anniversary of the first part of Cervante’s, Don Quixote. Made on august 10, 1955, the drawing Don Quixote was in a very different style than Picasso’s earlier Blue, Rose and Cubist periods. This is one of the most sought after Picasso Original Lithographs ever produced by the 20th century master.

The drawing is of Don Quixote de la Mancha, his horse Rocinante, his squire Sancho Panza and his donkey Dapple, the sun, and several windmills. The bold lines, almost scribbles, that compose the figures are stark against a plain, white background. The figures are almost laconic and deformed, and are dramatic. Sancho Panza looks up at a tall, elongated, gaunt Don Quixote, who, in return, gazes forward. Don Quixote and Rocinante stand nobly, but have a somewhat tired air. The figure, painted with heavy strokes, seems to have been changed multiple times as Picasso painted Don Quixote’s torso, arms and shoulder. “The knight’s head, capped by what would be Mambrino’s helmet, is connected to his shoulders by a neck made with a single, thin line, and it sports a pointed nose and a long, equally thin goatee. He carries a lance in his right hand and the reins and a circular shield apparently in his left. Rocinante is the bag of bones described by Cervantes. Panza appears to the left, a black mass vaguely defining his round body, and sitting on Dapple who has a long, wiry neck and thin, long ears. Little attention seems to have been paid to Panza sketched in the same vein, perhaps because Don Quixote is the center of attention. Though the two figures seem to be standing still, the drawing is full of movement; the lines are exuberant and the overall effect is catchy and one of bright humor.”