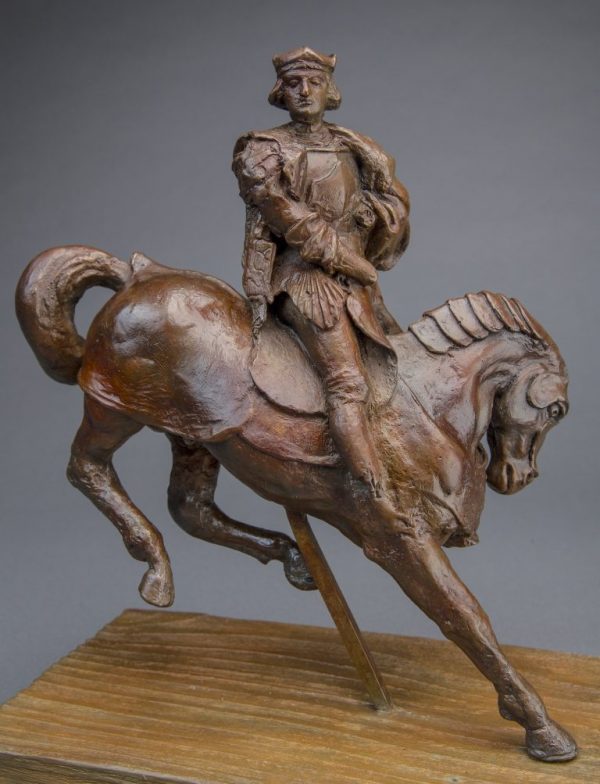 Horse and Rider by Leonardo da Vinci is a bronze sculpture, cast from the original beeswax statuette depicting a renaissance figure in full military dress on horseback

Long lost to the public eye this sculpture was created as a maquette in 1508 and is the only three-dimensional sculpture known to have been credited as a da Vinci work of art, authenticated by world renowned Leonardo da Vinci scholar, Carlo Pedretti in 1985. It is an equestrian portrait of the French Governor of Milan, Charles d’Amboise,(1503-1511) a patron and friend to da Vinci and likely a model for an intended larger bronze sculpture. The face of the rider in the delicate sculpture has a striking resemblance to the portrait of Charles d’Amboise by artist, Andrea Solario from the same period currently hanging in the Louvre. Charles d’Amboise died in 1511 and Leonardo’s monument was never cast in bronze.

Lost to the World

The beeswax sculpture measured 25cm in height, 23cm in length and 9cm in width. Upon Leonardo’s death in 1519, his pupil Francesco Melzi inherited The Wax, drawings, manuscripts and other unfinished works of art. Purchased in the early 1980s, the wax model became part of a private collection in London, England.

A Mold is Made

Over 5 centuries the equestrian wax portrait had suffered some deterioration. Consequently, in 1985 the English owner directed a mold be made of the wax to protect the integrity of the artwork, hoping to prevent further degradation. Finally, in 2012 the mold was utilized to cast the original bronze statuette of Horse and Rider. Leonardo da Vinci’s vast talent, displayed in an array of formats, is again shown in the intricate details of Horse and Rider. Observed and executed in a way unfamiliar with the classical statue portrayals he would have been used to seeing, Horse and Rider reminds us of the diverse nature of da Vinci’s interests.