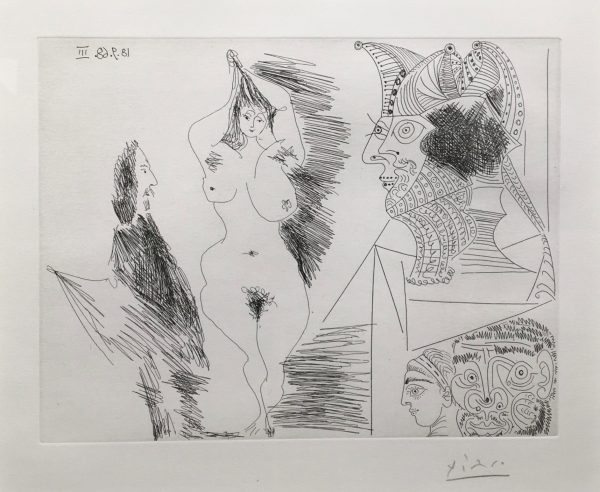 Original Etching from the 347 Series

Signed by the artist in pencil

After  a surgical procedure in 1956 to remove an ulcer, Picasso had given up traveling and had become something of a recluse. Other than his devoted wife Jacqueline and her daughter, Catherine, Picasso allowed very few visitors beyond his chauffeur and the Crommelynck brothers who worked on his beloved prints. To extend his cast of charachters, Picasso invoked figures from his past and from his group of favorite painters – which meant former mistresses, Barcelona whores and harlequins were, in his mind, rubbing shoulders with personalties from the works of Raphael, Rembrandt, Goya, Degas and Van Gogh – and sometimes even with the artists themselves. Picasso’s sexual powers may have deteriorated – it is thought that impotence set in around the age of eighty – but sex was still very much on his mind. During this period, Picasso produced two large ambitious etching projects, called the 156 Series – 1970 – 72 (yes, it contained 156 etchings) and the earlier 347 Series aptly named for the quantity of prints from that series.

There are several salient features of these two series. They generally comprise etchings, aquatints, or some combination of the two. Though they vary greatly in size, they tend to be dominated, often hilariously so, by the subject of sex. Brothel scenes and sex between individual couples are common. The former often contain a portrait of Degas, whose sketches of brothel scenes Picasso had recently acquired. These brothel scenes contain a delightful assortment of consenting adults and voyeurs, including a priest in the latter category.

This work of art from an edition of 72, an original etching from the 347 series produced in 1968, is one inspired by, and depicts the artist Degas visiting a brothel on the far left and introducing visuals taken from previous periods of Picasso’s own career, such as the Circus Jester, a profile view of classical portrait of a woman from his Rose period, and a tattooed Samoan. The work is dated in the upper left corner, September 9th, 1968 with the Roman numeral III indicating that this was the third etching completed that day.

While it is well known that Picasso found it a laborious chore to sign and number his prints after the edition was printed, this work carries a rare pencil signature (most from the two series carry a stamped signature). That it is not numbered designates the print as coming from the HC (hors commerce – meaning not for sale) edition of 5 proofs created prior to steel facing and beveling of the plate.

The justification of the impressions is as follows; 50 works numbered 1 – 50, 17 artist’s proofs and 5 works designated as HC