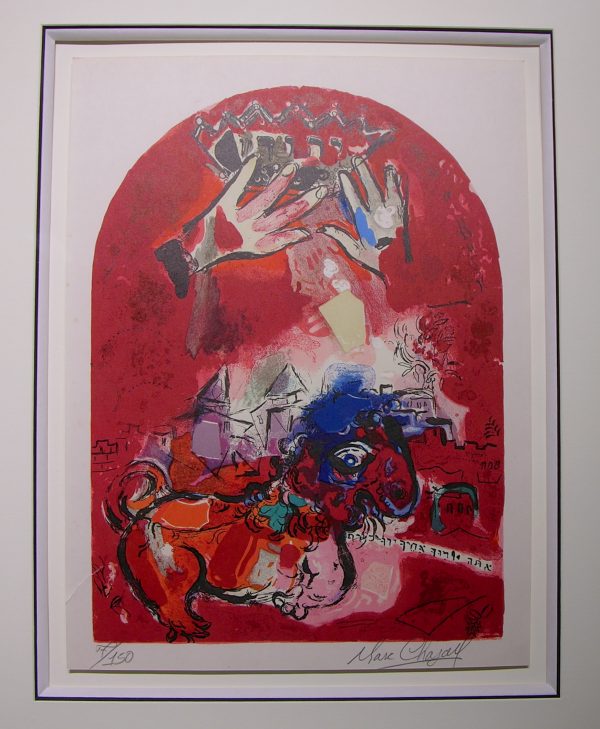 Judah from the Twelve Tribes of Israel

Marc Zakharovich Chagall (1887 – 1985) was a Russian-French artist. An early modernist, he was associated with several major artistic styles and created works in virtually every artistic medium, including painting, book illustrations, stained glass, stage sets, ceramic, tapestries and fine art prints. Chagall has been referred to as the quintessential Jewish artist of the twentieth century.

This stone lithograph is taken from a deluxe book published in 1964 on the making of the Jerusalem Windows (installed in the Abbell Synagogue at the Hadassah University Medical Center – 1962), after Chagall’s final models for the windows, under the artist’s supervision. Charles Sorlier, Chagall’s Master Printer, published this 20 color stone lithograph at the Mourlot atelier where Chagall executed all of his lithographs from 1950 until his death in 1985. The deluxe book, entitled, Vitraux Pour Jerusalem, was published in an open edition an in a very limited edition of only 150 signed and numbered copies. This work, created in 1964, is numbered 7 of 150.

The book illustrates the windows which figure the twelve sons of Jacob who became the heads of the Twelve Tribes of Israel in the order in which Jacob describes his sons in Genesis 49: “All these are the twelve tribes of Israel, and this is what their father said to them when he blessed them, blessing each one of them with a suitable blessing”.

This particular image depicts the tribe of Judah: “Judah, your brothers shall praise you; your hand shall be on the neck of your enemies; your father’s sons shall bow down before you. Judah is a lion’s whelp; from the prey, my son, you have gone up. He crouches down, he stretches out like a lion, like a lioness—who dares rouse him up? The scepter shall not depart from Judah, nor the ruler’s staff from between his feet, until tribute comes to him and the obedience of the peoples is his. Binding his foal to the vine and his donkey’s colt to the choice vine, he washes his garments in wine and his robe in the blood of grapes; his eyes are darker than wine, and his teeth whiter than milk.” (Gen. 49:8-12)