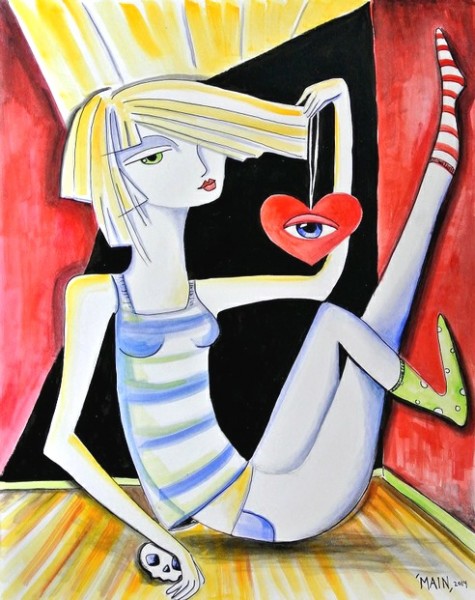 Jennifer Main has become one of the most prominent artists of Las Vegas. She began selling her work in galleries at the young age of 17 and has continued as a full-time artist with much success and recognition for the past 10 years showing her work in galleries nationally and has a growing respectable list of collectors worldwide. Main graduated from the Las Vegas Academy of International Studies, Performing, and Visual Arts as well as attended the prestigious School of The Art Institute of Chicago.Main’s work was recently featured on Mtv’s Real World San Diego, Discovery Channel’s American Casino, and the red carpet premiere for Warner Brother’s movie “Racing Stripes” starring Hayden Panettiere. Her work is currently on Cinemax’s new show “Sin City Diaries” starring supermodel and actress Amber Smith. She has painted the likeness of Jim Clark; venture entrepreneur and founder of Netscape, Alvy Ray Smith; co-founder of Pixar Animation, legendary Siegfried and Roy, and the great jazz entertainers Al Jarreau, Clint Holmes, and Dave Koz. Main was also selected to be the featured artist for the award winning Wildflower Arts and Music Festival in Texas and the Jazz and Art Festival at Mt. Charleston Hotel in Las Vegas, NV.