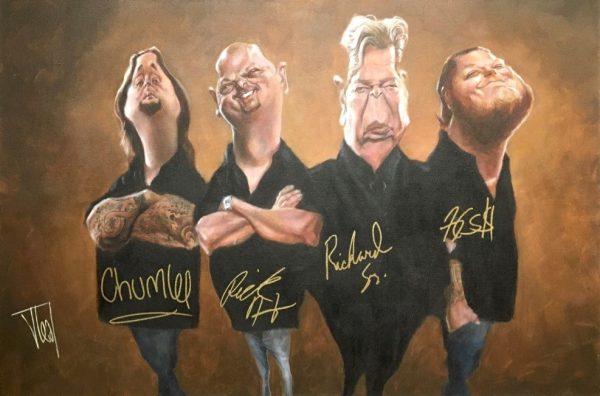 Special thanks to Rick for asking the fellows join in the fun and sign as well!

Jota Leal was born in a humble town in eastern Venezuela. He began drawing and painting at a very young age, and never studied fine art. He attempted to sit in art class as a child of six, but ran away after being forced to paint plastic fruit and empty bottles. Even at that young age, Jota knew what he wanted to do.  He wanted to paint people. He wanted to paint their faces. Leal’s subsequent birthday and Christmas gifts were all limited to pencils, crayons and drawing materials. Jota went on to study electrical engineering and graduated with honors. It did not take long for his circuits to become lines, numbers to become colors, and brushes to replace the sweep of physics theories.
In 2001 Jota traveled to Spain and lived there, immersing himself in the history and technique of art. He then returned to his hometown in Venezuela, where he received the Caricaturist of the Year Award for 2003. Jota’s art follows the grand tradition of the great portrait painters of the past, as well as the more recent caricature masters.

Rick Harrison saw the painting hanging in our gallery at the Forum Shops in Caesar’s Palace while filming an episode of the show with our own Brett Maly. Asked if he would sign the painting, Rick kindly went a step further and invited us to bring the painting to the pawn shop where he had the other stars of the famed TV show sign the work of art as well. Very nice of you Rick! Rest In Peace, Mr. Richard Harrison Sr.