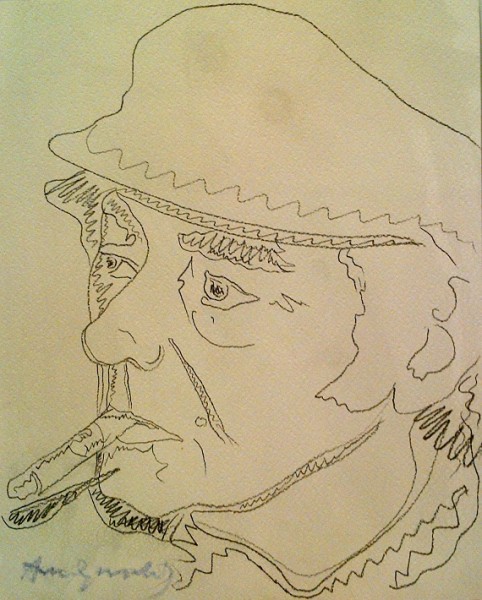 This portrait is based on a Polaroid photograph taken of the artist Man Ray (1890 – 1976), a central figure in the Dada and surrealist movements. The photograph was taken on November 30, 1973 in Paris, where Man Ray lived. An audiotape recording of the modeling session attests that
Warhol specifically requested Man Ray to hold his cigar in his mouth, remove his glasses, and keep his hands away from his face.

Although the majority of Warhol’s portraits from this trime were commisiions and featured the rich and famous, he also made non-comission portraits of fellow artists for whom he had great respect. In a self recorded video diary made in 1976 Warhol claimed that he ‘only really loved him (Man Ray) for his name, to be truthful… his name was the best thing about him’, though other evidence suggests that Warhol collected Man Ray’s photographs and prints, and the older artist’s painting Penture feminine 1954 was hung prominently in the sitting room of Warhol’s New York townhouse.