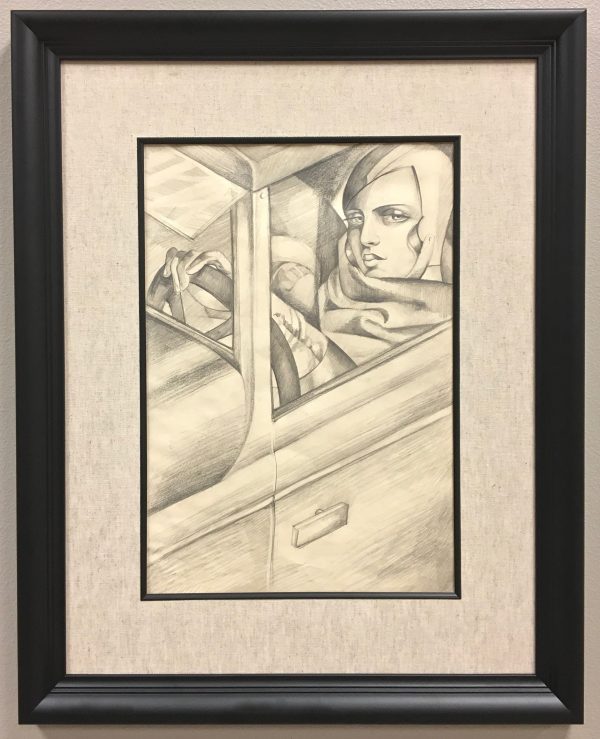 Pivotal To The Artist’s Career

This rare drawing, accompanied by a letter of authentication from the artist’s daughter, Baroness Kizette de Lempicka, is the finished study for the vital work of art that helped launch the artist’s career and obtain world wide recognition.

In one of its issues, the very widely read weekly “Vu” published a cover picture by Kertèsz, featuring a young lady at the wheel of a sports car. The picture caption specified that the model’s sports outfit, her gloves and her leather cap, were all from Hermès. Lempicka wears exactly the same accessories in her self-portrait, which was obviously inspired by the Kertèsz photo.

The green Bugatti in the famous “Self-portrait” was, in fact, a Renault. Moreover, it was yellow, if we are to believe the recollections of her daughter. Be that as it may, Lempicka was irresistibly seductive at its wheel, so much so that she caught the eye of the woman editor of a major German fashion magazine, Die Dame. This fruitful encounter subsequently provided Lempicka with opportunities to be featured on many cocirca of the magazine, greatly contributing to the spread of her reputation.

Never had an artist been so preoccupied with her own image as Lempicka: she herself did many self-portraits, and, more especially, spent hours to sitting for photographers, where she would take on the attitude of a professional model. Her long stay in Hollywood, and all her efforts to penetrate the movie world, suggest that she longed to be in the “spotlight”. Her “screen test” – with the newsreel producers Pathé in 1932 – shows a supremely self-assured image of her coming down the staircase of her rue Méchain studio, flourishing a seemingly endless cigarette-holder.