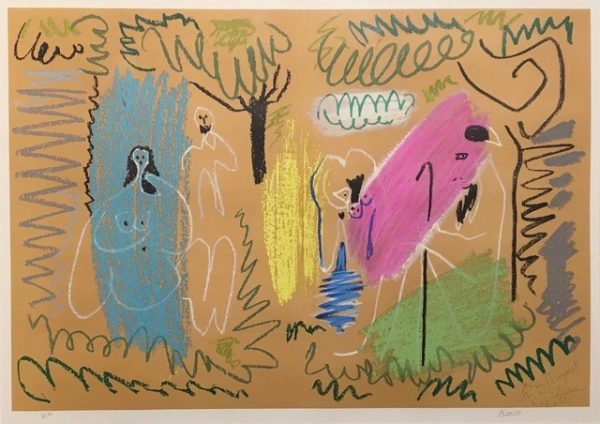 In 1961, at Jacqueline and Pablo Picasso’s suggestion, Margaret Silberman opened a gallery in New York called Picasso Arts. She had met Picasso eight years before and visited him periodically for the rest of her life. In 1969, shortly before her death, she assembled the notes she had made on her various visits, each of which had been marked by a gift from Picasso. Some were hardly more than a doodle, others elaborately finished drawings or ceramics. Her vivid recollections of the circumstances surrounding each occasion form the substance of this memoir, chronicling in a uniquely touching way the growth and deepening of an affectionate friendship.

The artwork:
This is a recreation of Manet’s, ‘Le Dejeuner sur l’herbe’ (Luncheon on the Grass) painted in 1862. This was one of Picasso personal favorite paintings. It has been recreated by him on several occasions, but never with such colorful abandon.