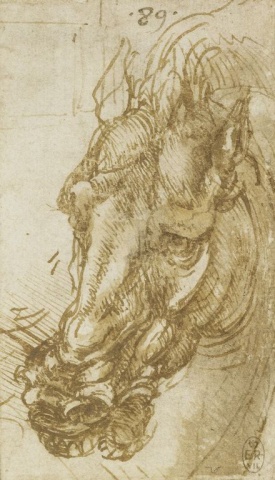 This drawing, preparatory for Leonardo’s mural of the Battle of Anghiari in the Palazzo della Signoria in Florence, was left incomplete.. The Battle gave full rein to Leonardo’s interest in the depiction of powerful emotion. Here he investigated the manner in which analogous muscles in each species cause similar expressions of fury, as he recorded in a note: ‘Etheir brows raised and knit, the skin above their brows furrowed with pain, the sides of the nose with wrinkles going in an arch from the nostrils to the eyes, the nostrils drawn up, the lips arched to show the upper teeth, and the teeth apart as if crying out in lamentation.