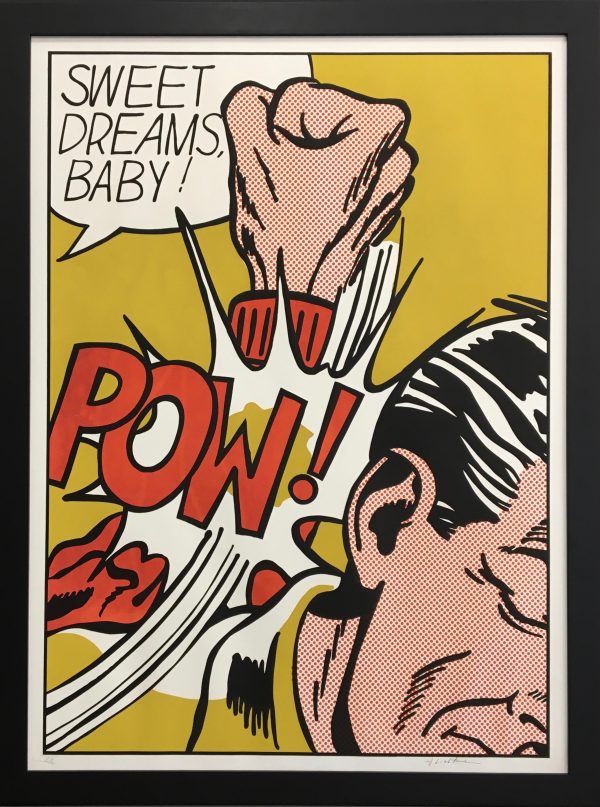 “Throughout, Lichtenstein was a classic Pop artist, categorically and definitively. His art is characterized not only by what is depicted, but equally by how it is made; the confluence of transposable subjects and indelible style is paramount, and in this, Lichtenstein never wavered. His disparate, and daringly indiscriminate, sources-an illustrated children’s story, comic strips, product packaging, newspaper advertisements, mail-order catalogues, museum postcards, the yellow pages-are equalized by Lichtenstein’s singular point of view. Inspiration as well as convictions regarding process, remains largely unchanged from the beginning to the end of his career-there is refinement, but no rupture. The core of his practice is to drain the particularity of an object or an image and impose his own affect.”
(James Rondeau and Sheen Wagstaff, Roy Lichtenstein: A Retrospective, The Art Institute of Chicago, 2012. p. 23-24.)

The comic-strip violence, highly-keyed colors and the signature Ben Day dots, accentuated by the deafening POW!, evince what is considered to be one of Lichtenstein’s first “true” Pop prints Sweet Dreams Baby! Published by Rosa Esman’s Original Editions, who also published Lichtenstein’s first solo print portfolio Ten Landscapes and Wesselmann’s Little Nude, this work formed part of the three-volume installment of 11 Pop Artists. The project was sponsored by Philip Morris, in association with five galleries (including the Leo Castelli Gallery), and encouraged the launch of several exhibitions at museums throughout Europe.

This wonderful example is numbered 20 of 20 artist’s proofs in Roman numerals – aside from the regular edition of 200.