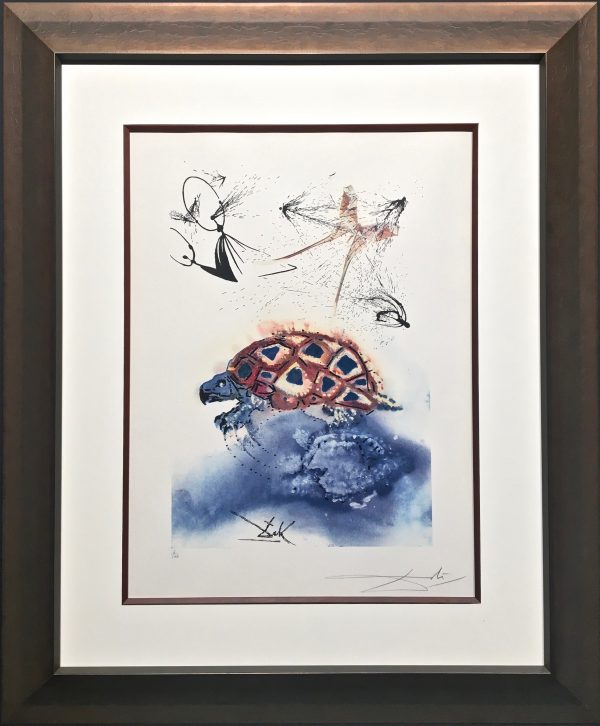 Exclusive Edition of only 100 Impressions

Mock Turtle’s Story is from Lewis Carroll’s Alice’s Adventures in Wonderland as interpreted by Salvador Dali.
Random House publishers commissioned Salvador Dalí to produce an exclusive edition of Alice in Wonderland, originally written by Lewis Carroll in 1865. Dalí created twelve heliogravures (lithographs) and a frontispiece, arranging both the text and images in a deluxe publication.

The Mock Turtle’s Story: The Duchess is brought to the croquet ground at Alice’s request. She ruminates on finding morals in everything around her. The Queen of Hearts dismisses her on the threat of execution and she introduces Alice to the Gryphon, who takes her to the Mock Turtle. The Mock Turtle is very sad, even though he has no sorrow. He tries to tell his story about how he used to be a real turtle in school, which the Gryphon interrupts so they can play a game.

This heliogravure is based on an original gouache, published in 1969 by Maecenas Press – Random House, New York. The total triage is 2800 + artist’s proofs. There are 2500 of the regular edition on Mandeure paper, 200 (I/CC – CC/CC) of the double edition on Rives & Japon paper – with only the frontispiece signed. Finally, there is an exclusive edition of only 100 impressions on Rives paper. In the version of 100, Dali signed the lithographs. These 100 contain the Rives watermark in the paper.

This example is numbered 6, from the small, exclusive group of only 100 impressions that were signed by the artist and is the perfect accompaniment to Alice’s Evidence.

This work has been very beautifully framed by our own framing division utilizing all conservation materials and is accompanied by a certificate of authenticity.