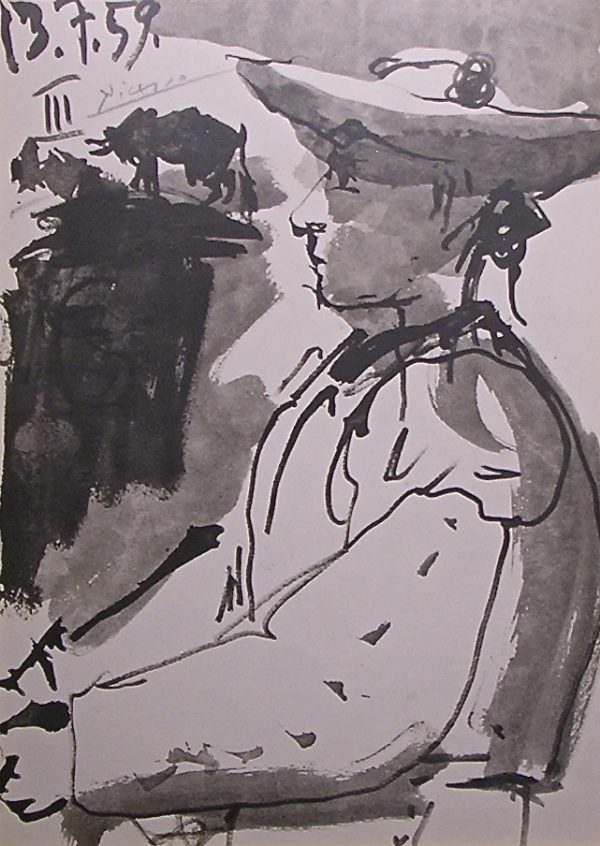 Portrait of Luis Miguel Dominguin, created by Pablo Picasso on July 13, 1959, was the third work in a series of 13 works in ink and watercolor wash, printed as a lithograph by Mourlot in 1961 and signed by Picasso.

The bullfight was a subject Picasso returned to frequently, particularly from the mid-1950s, and also one of his favorite spectator sports. Picasso, who had been taken to the Malaga bullring from an early age, was an avid follower of bullfights and after moving to Provence would often travel to the arenas of Arles, Nîmes or Vallauris to see them. Picasso’s friend and biographer Roland Penrose has written that, apart from his enjoyment of the action, ‘the main involvement for Picasso was not so much with the parade and the skill of the participants but with the ancient ceremony of the precarious triumph of man over beast … The man, his obedient ally the horse, and the bull were all victims of an inextricable cycle of life and death.’ (Roland Penrose, ‘Beauty and the Monster’, in Penrose and Golding 1973, p.170.)

This work depicts the portrait of Luis Miguel Dominguin (1926 – 1996), a famous bullfighter from Spain who made his first public appearance in the ring at the age of 11. As a socialite, he is recognized among other things, for his friendship with Picasso and for his affair with actress Ava Gardner while still married to Frank Sinatra.