Art encounter is the exclusive world wide representative of Horse & Rider, a tribute to Charles d’Amboise

“Mr. Nickerson sir, you have a phone call.”

“Please take a message Hilda,” says David Nickerson “and hold all my calls while Prince Phillip is with me.”

“I’m sorry sir, but the caller is Mr. Cadenhead sir, and he says it is a matter that cannot wait.” Nickerson glances at the Duke of Edinburgh, who nods his approval for Director Nickerson to take the urgent call.

Prince Phillip, husband of Queen Elizabeth II is after all, quite familiar with James Cadenhead. A bit of a rogue fellow thinks Phillip, who is aware of his service during the Cold War with US Military intelligence in Berlin after WWII.  Cadenhead would become a member of what became known as the ‘Monuments Men’, tracking down the whereabouts of millions of works of art looted by Hitler and the Nazi regime starting in the 1930s, continuing through WWII.  Since leaving the army Cadenhead had turned his skills as a hunter of objects d’art into a career, roaming the Mediterranean aboard his 80ft sailing yacht The Mariella, searching out hidden or forgotten paintings and other valuable artworks.

Founded in 1865, Mallett Antiques was one of the oldest names among London art and antique dealers. Under the Directorship of David Nickerson since 1967, with his affable personal style and unbelievable enthusiasm for just about everything, Mallett became one of the most profitable as well.  The British Royal Family were known to be avid supporters of Mallet Antiques, having acquired art works, furniture, and other collectables, many added to the Royal Collection.

Deep in thought after his conversation with Cadenhead, David Nickerson slowly returns to where Prince Phillip is strolling through Mallett’s extensive collections.  The 60-year-old Prince is studying a rare Elizabethan era clock, contemplating a gift for his mother-in-law’s 82nd birthday. Queen Elizabeth I – The Queen Mother, had been associated with Mallett at Bourdon House over 70 years, frequently visiting the Mallett galleries.

“I do hope Mr. Cadenhead’s interruption was, indeed, a matter that will ultimately be profitable for you David,” quipped Prince Phillip at the site of David Nickerson approaching.

“Yes, your Highness, I am confident James’ call will prove to be an extraordinary opportunity for all involved.”  Nickerson had already decided the details of his conversation with Cadenhead were not to be shared with anyone, including the Royal Family, at least not until he had control of the work.  After all, a lost work now found, by the Renaissance Master himself, would rank with the century’s greatest discoveries…akin to finding the art world’s Holy Grail!

Together with James Cadenhead, David G.F. Nickerson formed a consortium of investor/collectors which purchased Leonardo’s wax model of horse and rider in 1982. Nickerson and Cadenhead began putting together a plan to raise awareness of the heretofore unknown sculpture. Doing so they believed, would create world-wide interest, intrigue, mystery, as well as demand, increasing the value! Where had the wax model been these past centuries? A lost Leonardo, found? What could it be worth? The story of a 500-year-old beeswax sculpture turning into solid bronze, was about become reality!

#1:  Leonardo’s wax model of a horse and rider c.1506-1511, survived into the 20th century! Clearly, the sculpture had been recognized early on, as an important work by Leonardo himself.

#2:  After five hundred years of deterioration, the owners of Leonardo’s equestrian wax model determined it would be prudent to preserve and protect the integrity of Leonardo’s sculpture. A mold was commissioned to be made of the wax model without destroying the very fragile wax sculpture itself.

#3:  The extraordinary quality of the mold, enabled artisans to cast a bronze of Leonardo’s horse and rider, preserving forever, every nuance and detail of the wax sculpture Leonardo had created five-centuries before!

Next, view photos of 500-year-old Wax Model, the MOLD made of Leonardo’s Wax Model, and the original HORSE and RIDER sculpture cast in bronze. 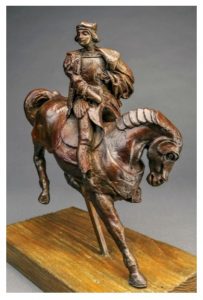 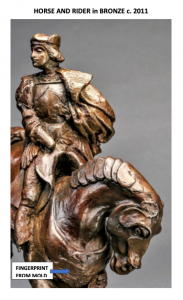 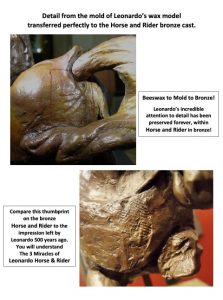 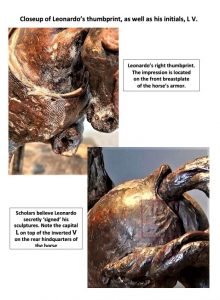 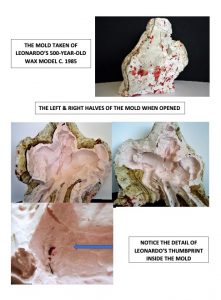 Please call for additional information and historical analysis of The Bronze.